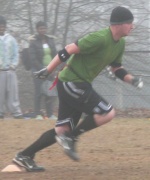 I think Henne had a good night over all, but just looked nervous at the start of the game. His early incompletions were high over-throws (usually a sign of nervous energy) and his ill-fated run up the middle might have gone for huge yards had he run to his right. The special teams lost the game in my opinion. Kickoff coverage was horrible. The run-blocking was shoddy as well.
I am losing faith in the "Wildcat". Every time the team reached the 20 we switched to the Wildcat and killed Henne's rhythm and the team's momentum. The formation works better out at midfield.
Finally, Polite is rapidly becoming the next Csonka, and I wish we would give him carries beyond "3rd and 1" . There were a few times in the game where Ricky went down but Polite, had he been the runner might have gained more yardage, and that includes one of the "Wildcat" plays.